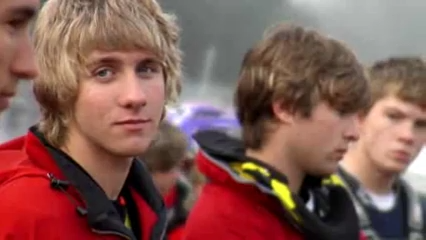 As we referenced last week in Vintage Vibes I, Troy Dog, love Mini O’s so much that I’ll be sharing a gem from that race all November long in this column.

In 2008 I made my first journey down to Mini O’s. I drove down with Ezra Hasting’s family when he was racing the 50 7-8 class. I don’t remember much from the week other than watching the A classes in Supercross and spending a lot of time on vendor row. I went to check out the Vurb tent a few times and I could never find anyone. Otherwise I would have taken over the company a year earlier.

This video is some sauce, bro. All of the B roll in the beginning uncorks so many memories that I didn’t even remember I had. Chili Dog and Stew Dog put together a who’s who of amateur motocross at the time including Justin Barcia, Brandon Mays, Christian Craig, Chase Bell, Thomas Covington, Travis Baker, Lowell Spangler, Blake Baggett, and Eli Tomac. That’s only in the off of the bike footage!

I remember being so pumped for this race because Barcia was racing his only amateur national in A classes and Tomac was making his debut for Factory Connection Honda’s amateur team as well. That was an incredible 1-2 punch for that crew. They would go on to award the team with four championships in the pro ranks.

We get a little interview with Factory KTM supported Derek Rogers. In my opinion, he’s one of the most forgotten about riders in the history of amateur riders. He was super fast and on the KTM super team trio of Jason Anderson and Max Anstie. He was always one of Chili Dog’s Georgia boys. Oddly enough, a few months later that team would get into a tussey at Oak Hill over all kinds of drama. Anderson went on over to Team Green, Anstie went home to Britain, and Rogers was never really ever in the spotlight after that. He told me in an interview years later that he was burned out. He raced one National as a pro at Freestone in 2010.

I think the best part of this entire video is the AJ Catanzaro interview. AJ was a beast at Mini O’s and in 2008 and 2009 he was a standout to me. It’s cool to see him still in the game today. He knows how I feel but, HE SHOULD REALLY TAKE TIME AWAY FROM RAKING IN THE CASH WITH HIS RIDING SCHOOLS AND VLOGS TO CRUSH MAIN EVENTS! All joking aside, AJ is truly crushing it in the business side of things and he’s the reason the SGB team started. Cat Dog just announced yesterday that he’s leaving the team and a BIG ANNOUNCEMENT is to follow soon. Stay tuned on that.

Also, AJ is just a rad dude and needs more exposure; he knows Troy Dog’s always got his back on that!