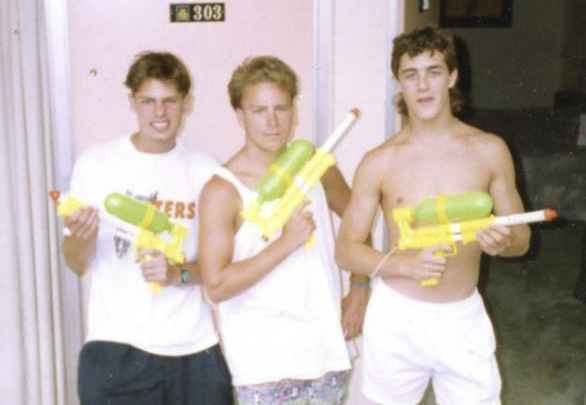 If you haven’t noticed, our own Bird Dog has taken it upon himself to rank the top ten coolest riders of all-time. It is a tough gig, but someone had to do it, right? The list is great and all and it’s totally BIRD DOG’S opinion. So, in my opinion Bird Dog is wrong and he left one super major important cool guy off the list.

I am here to make a case for my new best friend, Denny Stephenson, or Den Dog as I, his true friend, calls him.

Denny and I have a long history of being buddies. I first encountered Den Dog a month ago on Twitter after he READ ONE OF MY STORIES, and since then it has just been a bro down session.

I feel it is my duty to stand up for my guy.  He is one of the core dudes that I think about when it comes to this sport in the ‘90s.

When Stephenson turned pro, his 125SX results were damn good. Like, on pace or better than Justin Cooper good—just without the dogs on the podium. Don’t believe me? In his first ten 125 Supercross races he went: 10,12,7,5,6,3, 4,4,3,8. Also, he moonlighted in the premier class almost immediately after turning pro. Putting in some great results along the way. That is some cool shit!

My dad taped the entire 1989 Supercross Championship before I was even born. I watched those tapes religiously as a 7-year-old and into my early teen years. I am surprised that the VHS tape still works. Nothing was cooler then hearing Larry Maiers say, “Here comes the #360. That’s Denny Stephenson on the green Kawasaki!”

When I was a couple months away from being shat out of my mother’s womb, Denny wrapped up the 125 East Region title in dominating fashion. He won eight races (according to the Racer X Vault), which was a record at the time, and records are pretty darn cool.

I have heard countless stories about the antics that Denny and his best buddy (at the time) Jeff Matiasevich would get into. These guys are the epitome of coolness in the ‘90s. These are the dudes that McGrath and Emig wanted to hang out with—not vice versa. Chicken and Den Dog were the life of the party and it did not matter if they were in Havasu or Indianapolis. They were the living it up—ask your mom about them.

Denny also flew on a private jet to races in the ’96 season. If only those jet walls could talk. I do not see any of the other guys on Bird Dog’s list doing this.

Also, once Denny’s reign of supercross was over after the ‘96 season, he was talked into racing the Arenacross series by the greatest AX racer of all-time Buddy Antunez. He challenged Buddy for wins and titles along the way and took home so much cash that even a Brink’s truck would be jealous. Arenacross was incredibly badass in the late ‘90’s and early ‘00’s and we have Denny to thank for that.

Above all, he is by far the coolest thing to ever come out of Nebraska (sorry Brian Deegan, maybe if we were bros it would be a different story).

Bird Dog messed up big time while overlooking my new bestie, especially when he issued an apology to Damon Bradshaw and NOT my pal. I do not see Damon reading and conversating with Troy Dog on Twitter, which is so NOT cool.

WE have more to list, but Troy Dog has already written WAY too many words for one week. Therefore, WE rest our case. My best friend Denny deserves to be on Bird Dog’s list.